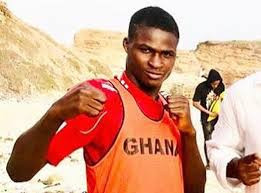 A young boxer from Ghana tipped to be among the country’s main hopes for a medal at the 2023 African Games has been buried today after suddenly dying last month.

John Commey passed away in a hospital in Accra at the age of 18.

“It is a big blow,” he told Modern Ghana.

“For the 2023 [African] Games going to be held in Ghana, he was supposed to be part of the team.”

Commey’s father, Percy, was previously one of Ghana’s best boxers.

As a professional featherweight he won titles at African and Commonwealth level.

Commey had been training with another relative, Richard Commey, the former International Boxing Federation lightweight champion, and winner of 29 of his 32 fights during his career.

There was no reason given for Commey’s death.