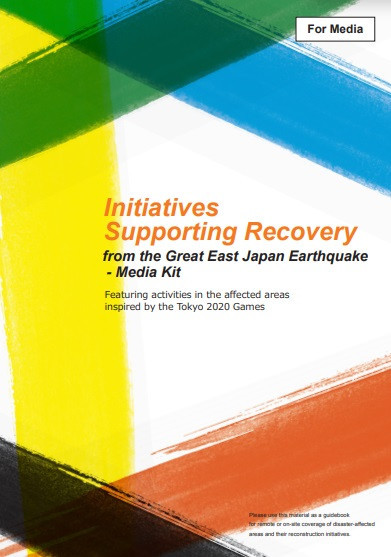 Organisers of the Tokyo 2020 Olympic and Paralympic Games have published a media guidebook as part of its efforts to commemorate the 10th anniversary of the Great East Japan Earthquake.

The media kit provides details on Games-related initiatives supporting recovery and reconstruction in the Tōhoku region which was severely affected by the disaster.

Around 16,000 people died after an earthquake with a magnitude of 9.0 - the strongest ever recorded in Japan - and a tsunami caused an accident at a nuclear power plant in Fukushima on March 11, 2011.

Recovery from the earthquake has been incorporated by Tokyo 2020 as one of the major principles underpinning the hosting of the Games.

Baseball and football matches are among the events set to be held in the region when Tokyo stages the postponed Olympic Games later this year.

The aim of the Organising Committee is to convey the status of reconstruction of Iwate, Miyagi, and Fukushima, the three prefectures that have been most affected by the disaster, and to thank people around the world for their support.

The guidebook features the Olympic Torch Relay, which is due to start in Fukushima on March 25, and the efforts to utilise food, wood, flowers and other items sourced from the disaster-affected areas in the provision of Games’ facilities.

It also includes interviews with people involved in these initiatives, details exchange activities with other countries, and documents the feelings of the people impacted by the earthquake and their expectations of the Tokyo 2020 Games.

Ishikawa Yoshiaki, director general for Department of Culture and Sports for the Iwate Prefectural Government, described Tokyo 2020 as the "Recovery and Reconstruction Games".

"Iwate Prefecture would like to express its gratitude for the support it has received in Japan and overseas, and to convey to the world the process we have made with reconstruction," said Yoshiaki.

"We would additionally like to showcase the attractions of Iwate.

"These include World Heritage sites, local performing arts, and a rich variety of food and other products.

"The Recovery and Reconstruction Games will be a source of strength supporting the recovery from the earthquake and tsunami, and we are therefore taking initiatives to promote the coastal areas and help realise the dreams of the children on whose shoulders the future will rest."

Oyama Akemi, director general for Olympic and Paralympic Games promotion as part of the Earthquake Disaster Restoration and Policy Planning Department at the Miyagi Prefectural Government, said Tokyo 2020 was a "great opportunity" to show the world the extent of the area’s reconstruction.

"Miyagi Prefecture has received tremendous support from people all over the world, for which I thank you from the bottom of my heart.

"We hope that visitors to Miyagi will not only attend competition events but also take this opportunity to visit different places in our prefecture and enjoy the many charms of Miyagi."

Noji Makoto, director general for Culture and Sports Bureau at Fukushima Prefectural Government, added: "We also hope to showcase the progress we have made with reconstruction as well as highlight the various challenges we still face.

"Through the initiatives detailed in this media kit and through the voices of the local people who have been working so hard, we would like to express our thanks and convey to the world the Fukushima of now, a region which has overcome an unprecedented disaster and continues to move toward recovery."