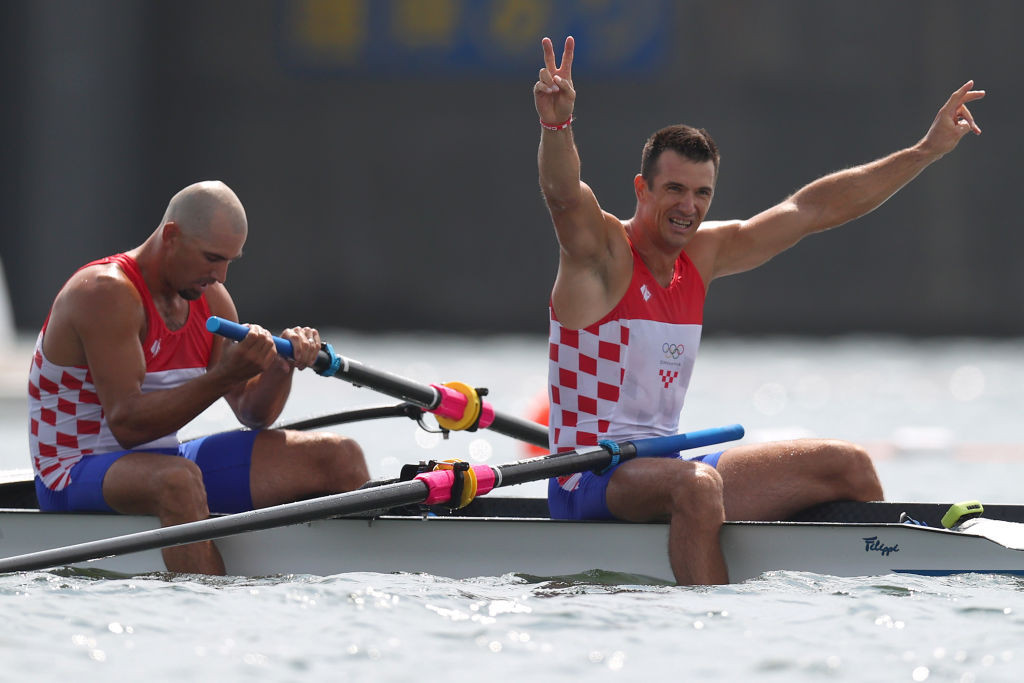 Five years after winning the men’s double sculls title at Rio 2016, Croatia’s mighty Sinković siblings added Olympic men’s pair gold to the version they won at the 2019 World Championships, taking the title that was won at London 2012 and Rio 2016 by the now discontinued double act of New Zealand’s Eric Murray and Hamish Bond.

The Croatians went for broke from the off, powering into a two-seconds lead by the 500 metres mark, and they were never headed as they came home in 6min 15.29sec.

Romania’s Marius Cozmuic and Ciprian Tudosa, the fastest qualifiers, worked their way back into contact by the end but had to settle for silver in 6:16.58, with bronze going to the Danish pair of Frederic Vystavel and Joachim Sutton in 6:19.88.

"It’s an unbelievable feeling to win in another discipline," Valent Sinković said.

"Everything went exactly according to our plans."

In the women’s pair New Zealand’s world champions played a cagier game, moving past the early leaders Canada to hit the front with just over 500 metres remaining, the moving away to win in 6:50.19, a day after setting a world best time of 6:47.41, and in so doing providing their country with its first gold of these Games.

The Russian Olympic Committee crew of Vasilisa Stepanova and Elena Oriabinskaia, dark horses, stalked through from fourth to silver over the closing stages, crossing in 6:51.45, with Canada’s Caileigh Filmer and Hillary Janssens being rewarded for their boldness with bronze in 6:52.10.

Britain's double Olympic champion Helen Glover, who returned to competition after a four-year break this year aged 35, and her partner Polly Swann, hung on to third place for most of the race, but dropped away to finish a distant fourth in 6:54.96.

Following the previous day’s failure by the men’s four to earn a medal in an event Britain had won in the five previous Olympics, the result contributed to growing gloom for the nation that has topped the Games medal list on the last three occasions.

The New Zealand pair, meanwhile, will prepare to play a further part in the Olympic regatta as part of the women's eight in tomorrow's final.

"We had a great weight of expectation on us, but once we line up we know what we have to do," said Gowler.

"Our colleagues in the eight are so pleased for us, but we need to start getting ourselves ready for tomorrow as soon as we can.

"Their excitement will get us up and hopefully we'll be able to row just as well tomorrow."

Like the pairs winner, O'Donovan and McCarthy were attacking an Olympic final as world champions.

The Irish pairing had laid down the marker of a world best time in winning yesterday's semi-final in 6:05.33, and they timed their move through the field perfectly to finish in 6:06.43.

O'Donovan, who won Olympic silver at Rio 2016 with his brother Gary, now has a medal of an even happier hue, which added to the Irish glow created yesterday when their women's four won bronze - the first Irish women's Olympic rowing medal.

A little of the shine wore off before the end of the morning, however, as Ireland’s women’s world single sculls champion Sanita Puspure failed to reach tomorrow’s final.

The women’s lightweight doubles produced the most exciting finish of today’s finals, with four boats in a line going for broke over the final 500 metres.

The French pairing of Laura Tarantola and Claire Bove were just 0.14 seconds back in silver, with the Dutch world silver medallists Marieke Keijser and Ilse Paulis taking bronze, 0.49 seconds back.

Britain's world bronze medallists Emily Craig and Imogen Grant miss a medal by one hundredth of a second.

Later in the day the men’s world single sculls also missed out on the final as Germany’s Oliver Zeidler finished a disconsolate fourth in his semi-final.

The single sculls and eight finals are due to conclude the Olympic regatta tomorrow.