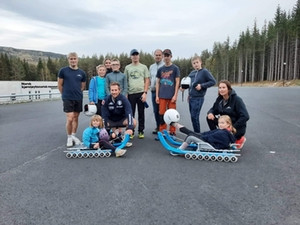 The Italian natural track luger led events in Oslo and Lillehammer as part of the FIL's tour, designed to encourage participation in the sport.

Between 10 and 15 children took part on the trial course on the legendary Holmenkollen and in Lillehammer, which hosted the 1994 Winter Olympic and Paralympic Games.

Pigneter was accompanied by the former luger Knut Solheim at the "FIL school" events.

It is hoped they will lead to an increased uptake of luge in Norway.

The FIL has set a target of having Norwegian athletes compete on its World Cup circuit and hosting natural track events.

Norway is the most successful country at the Winter Olympics and leads the all-time medal table on 368, but none have come in luge.

"A start has been made, it would be ideal if we could come back to Norway with the FIL school next March," said Pigneter, who won three gold medals at the 2009 World Championships.

"Then we could practice on ice with young athletes."