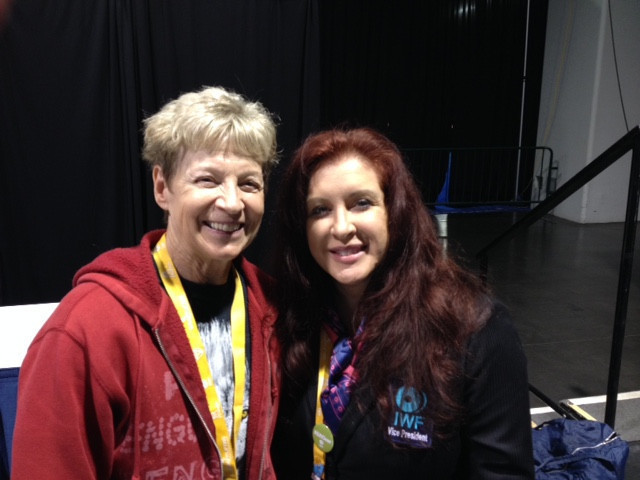 Papandrea led the IWF from April last year as acting and then interim President, following the resignation of Tamás Aján, the leader since 2000, after widespread corruption in the sport was revealed in a German television documentary.

Her attempts to implement reforms ended abruptly, however, in October 2020, when she was forced out of office by the IWF Executive Board following a rift in the organisation's leadership in a move which drew criticism from the International Olympic Committee (IOC).

Intarat Yodbangtoey of Thailand was the Board's choice of replacement at a virtual meeting in which Papandrea did not take part.

Papandrea confirmed her intention to regain the leadership position at the IWF in January this year, condemning the "toxic culture in corruption," and said in June that her efforts to implement change "were delayed and blocked".

While on the IWF Executive Board from May 2017 to October 2020, Papandrea initiated notable reforms, including the creation of a Reform and Governance Commission and the IWF Athletes' Commission.

She also signed the first agreement between the IWF and the Court of Arbitration for Sport’s Anti-Doping Division, and worked closely with the International Testing Agency (ITA) and IOC.

Papandrea had previously held roles as USAW President, having served the maximum of three terms on its Board of Directors from 2009 to 2020, and IWF vice-president.

"USA Weightlifting continues to fully support our former President and her leadership of our international relations campaigns," Aranda said.

"Ursula’s unrelenting dedication to reforming and improving weightlifting internationally and her commitment to delivering for the athletes we serve make her the right choice to help lead our sport forward."

USAW vice-chair Jenny Schumacher added: "USA Weightlifting is proud to be at the forefront of the necessary reforms and clean sport initiatives that will ensure our sport stands as the model for Olympic sport and the values we all seek to advance

"Papandrea initiated so many of those critical reforms while in office and it's crucial she have an opportunity to put them fully into practice."

The American thanked the USAW Board for its support of her campaign.

"I am honoured to have our board’s support and very proud to be part of an organisation that respects the rules of our constitution and democratic processes," said Papandrea.

"I will continue to advocate for the principles we adhere to of good governance and clean sport as we collectively work to elevate the sport of weightlifting."

USAW has also nominated Katherine Nye, a reigning world champion and Tokyo 2020 silver medallist, for membership of the IWF's Athletes' Commission and Aranda as its candidate for the IWF Development and Education Commission and its Gender Equality Commission.

Phil Andrews is also among the National Federation's nominations for positions at the IWF, with USAW's chief executive and general secretary put forward for the newly created Governance Commissions.

The IWF elections for President, Executive Board and other positions are scheduled to take place at the IWF Electoral Congress on December 20 and 21 after the World Weightlifting Championships in the Uzbekistan capital Tashkent.

The International Federation is set to elect its first permanent leader since the disgraced Aján, who in June 2021 was charged with complicity and tampering with multiple anti-doping rule violations by the ITA, along with other high-ranking officials in Romania's Nicu Vlad and Turkey's Hasan Akkus.

Weightlifting had been plunged into crisis by issues with its governance, with IOC President Thomas Bach warning it could lose its place at the Paris 2024 Olympic Games if its concerns were not addressed.

The IOC had been unhappy with the general governance of the IWF and its failure to give athletes a meaningful voice or accept independent advice.

Elections were delayed from their original date of March to allow a new Constitution to be adopted amid fears for its place at the Olympics.

The decision to delay elections until after this summer's Olympics was criticised by notable figures, including Papandrea, who offered an alternative timeline under which elections would have bene held virtually in July and weightlifting's sport manager at Tokyo 2020 Reiko Chinen, who said the IWF Board had "not understood enough" about the IOC's concerns.

Russian official Maxim Agapitov has also confirmed his intention to stand to become President of the IWF.