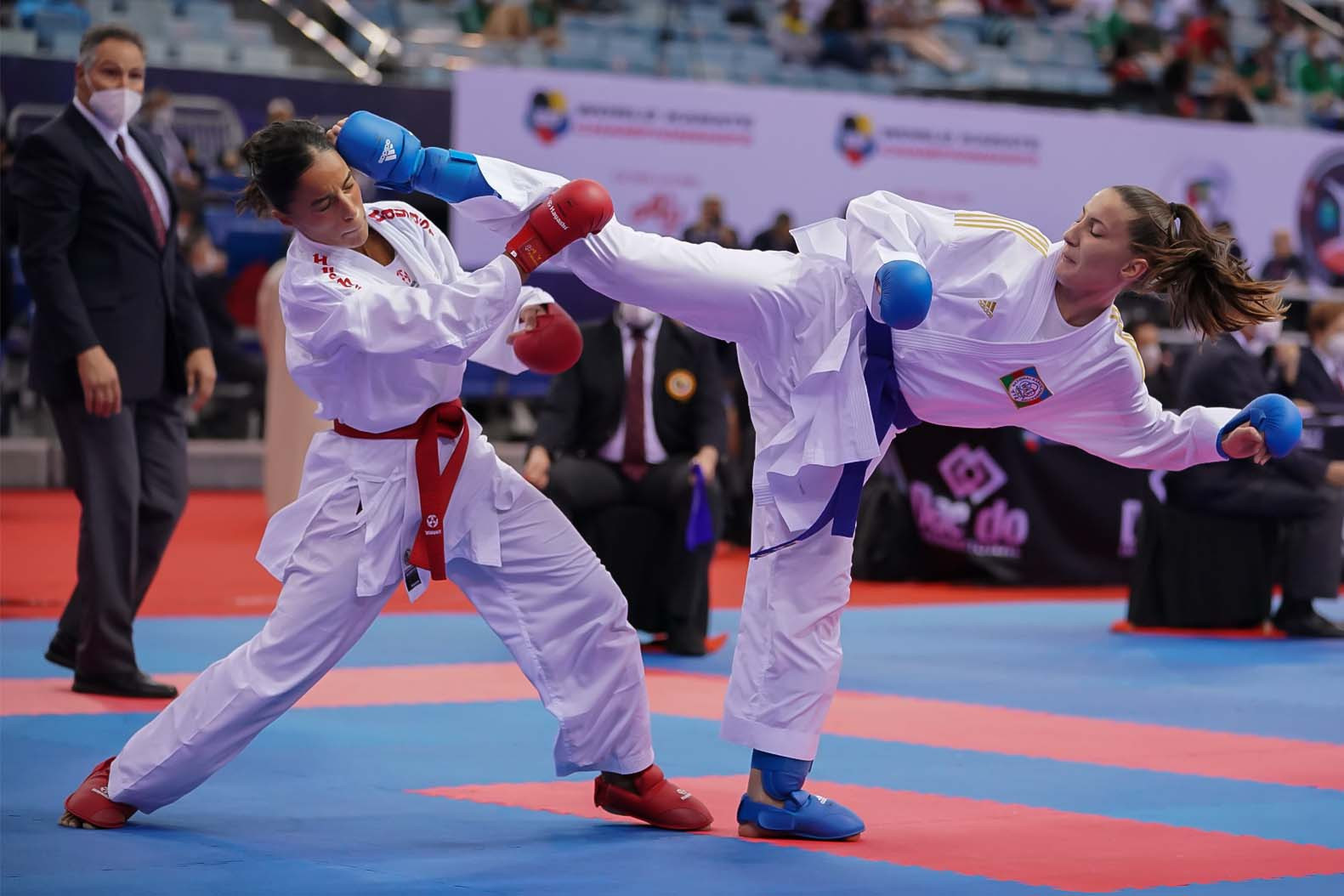 Olympic silver medallist Irina Zaretska took a giant step towards retaining her women's under-68 kilograms kumite title as three Egyptians progressed to finals on the opening day of the Karate World Championships here.

Zaretska, who took silver in the over-61kg event during karate's Olympic debut at Tokyo 2020, produced a series of high-scoring displays to book her place in the gold-medal match on Saturday (November 21).

The Azerbaijani sealed her spot in the final with a 10-3 thrashing of former world champion Alisa Buchinger of Austria.

Zaretska, the only defending champion competing today to make a final, will face Italy's Silvia Semeraro, who continued her superb run of form this year by reaching the showpiece bout.

Semeraro, twice a winner on the Karate-1 Premier League circuit in 2021, beat Canada's Melissa Bratic - who ousted Olympic over-61kg champion Faryal Abdelaziz in the quarter-finals - 1-0 in a tight contest.

While Abdelaziz failed to add the world title to her coveted Olympic crown, three Egyptians will go for gold when the final block takes place at the weekend.

Youssef Badawy capped off a stunning run to the men's under-84kg final, which included knocking out defending champion Ivan Kvesic in the first round, with a thrilling win over Frenchman Jessie Da Costa.

Da Costa - whose twin brother is Steven Da Costa, the first karateka to win Olympic gold at Tokyo 2020 - led for most of the contest but was pipped by a yuko score late on.

Badawy will go up against Chile's world number 50 Fabian Huaiquiman, who edged out Morocco's Nabil Ech-Chaabi in his semi-final.

Menna Shaaban Okila had earlier sprung a surprise by reaching the women's over-68kg final, where she will take on Spain's Maria Torres Garcia.

Abdalla Mamduh Abdelaziz made it a hat-trick of finalists for Egypt when he beat Belgium's Quentin Mahauden 3-0 in a one-sided men's under-75kg semi-final.

Abdelaziz's opponent will be Dastonbek Otabolaev of Uzbekistan, who narrowly got past double Pan American Games gold medallist Thomas Scott of the United States.

Gogita Arkania will get the chance to regain the title he last claimed in 2014 after the Georgian veteran rolled back the years with a convincing performance in the preliminary rounds of the men's over-84kg class.

The 37-year-old beat Croatian opponent Andjelo Kvesic 3-1 to qualify for his first world final since he clinched gold in Bremen seven years ago.

Olympic silver medallist Tareg Hamedi, disqualified from the heavyweight final at Tokyo 2020 in controversial circumstances, was beaten by Greece's Georgios Tzanos in the last 16.

The last set of kumite eliminations are scheduled to be held when the Championships, postponed from last year due to COVID-19, resume tomorrow.