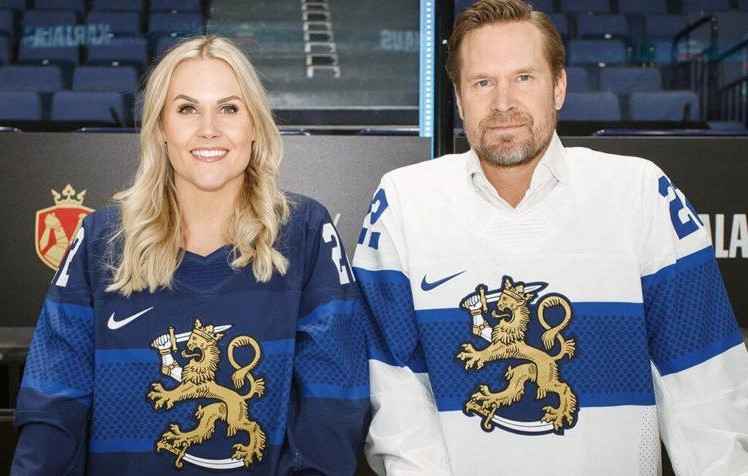 Finland has unveiled the jerseys its ice hockey team will be wearing during the 2022 Winter Olympic Games in Beijing.

The jerseys, which were modelled by players Annina Rajahuhta and Kimmo Timonen, have been designed by American manufacturer Nike.

They feature the crowned lion from the Nordic nation’s 440-year-old coat of arms, placed on a horizontal blue stripe.

Both jerseys feature a darker blue dot pattern within this horizontal stripe.

Player numbers are one colour - the same lighter blue as the stripe on the white set, while the navy blue jersey uses white numbers.

Finland’s men’s team have taken part in every Olympic ice hockey tournament since Oslo 1952, with the exception of Cortina d'Ampezzo in 1956.

They have won a medal in six of the last nine tournaments.

Finland's best performance were silver medals at Calgary 1988 and Turin 2006.

Their last medal was a bronze at Sochi 2014.

For Beijing 2022, Finland have been drawn in Group C alongside Sweden, Slovakia and Latvia.

Finland have competed in every women’s tournament since it was added to the Olympic programme at Nagano 1998, winning a bronze medal.

They have also won bronze medals at Vancouver 2010 and Pyeongchang 2018.

At Beijing 2022, Finland have been placed in Group A with the United States, Canada, the Russian Olympic Committee and Switzerland.

Beijing 2022 is due to open on February 4 but the women's ice hockey tournament is set to start the day before with two matches, including Finland taking on defending Olympic champions America.

The men's tournament is scheduled to start on February 10 and conclude on February 20, the day of the Closing Ceremony.