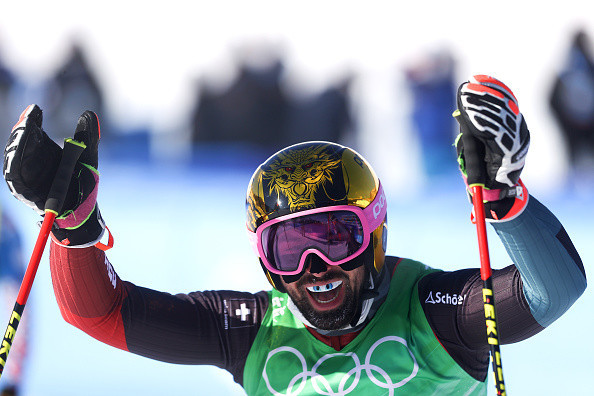 Regez headed into the Games as one of the favourites, with the 29-year-old being the in-form man on the circuit, but was only seventh in seeding, where all skiers have a run down the slopes to set their quickest time.

His most notable opponent looked to be his team mate Alex Fiva, who put down the fastest time in the seeding, laying down a challenge for the Olympic title.

In the medal final, Regez looked comfortable as the leader in the end, but had to stave off challenges from Fiva, Russian Olympic Committee's Sergey Ridzik and Sweden's Erik Mobärg, who overtook the Swiss skier at points in the early race.

When Fiva came under pressure from behind, Regez was able to bridge a gap, giving him a safety cushion going into the final jump, clearing it without issues and giving him the gold as he crossed the line.

"What a crazy way has been so far," said Regez.

"It's more likely to be struck by lightning twice than actually to become an Olympic champion or even a medallist, it's unreal.

"In the final I messed up the start a bit, and then the other guys caught up and overtook me.

"And then they messed up a bit and I took the lead with a lot of speed over the rollers and just went so, so hard all the way until the finish."

The round of 16 saw World Cup winners from this season David Mobärg from Sweden and France's Terence Tchiknavorian get eliminated, alongside the third fastest down the slopes, Ryo Sugai of Japan.

In the quarter-finals, 2019 World Cup champion Bastien Midol of France was knocked out, as was Canadian Reece Howden in a photo finish with team mate and defending Olympic champion, Brady Leman.

In the small final, 21-year-old Simone Deromedis of Italy held off veterans Leman, Johannes Rohrweck of Austria and France's Francois Place - who are all over 30 years old - to finish fifth.

Leman was sixth, with Rohrweck and Place completing the top eight.