With numerous world-class stadiums and arenas, and a proven track record as a reliable host, Russia will continue to be the setting for the most important sporting competitions well into the future.

Russia successfully hosted the FIFA World Cup in 2018, and has numerous major events to look forward to.

This includes World Championships as well as key meetings within the Olympic Movement.

"CAS decisions influenced the possibility of holding some international competitions, but today Russia continues to be one of the main arenas for such competitions," said Russian Sports Minister Oleg Matytsin.

"Of course, in the absence of the imposed restrictions, we would successfully apply to host even more major international tournaments.

"We know how to carry them out, and they are always to the standards for the international community."

Russia will host the 2022 edition of the International Volleyball Federation Men's World Championship between August 26 and September 11.

Two rounds of group matches will be held before the final six stage of the tournament - which will determine the winner - takes place in Moscow.

Matches will span four different time zones with a distance of 5,000 kilometres between the westernmost and easternmost host cities.

All of the venues will be modernised to ensure a lasting legacy, and it is hoped there will be 500,000 fans in attendance across the 10 cities.

"Millions of fans around the world will be part of a large-scale event that will undoubtedly go down in world sports history," said Russia's Deputy Prime Minister Dmitry Chernyshenko.

"Our whole country is happy to host the Men's Volleyball World Championship.

"The Championship will be held in 10 host cities - this is record geography in the history of volleyball."

Russia will expect to be strong at their World Championship on home soil, after winning silver at the Tokyo 2020 Olympic Games.

Poland are the defending champions. 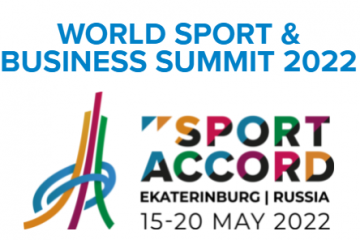 Russia will welcome the most important people in global sport for the SportAccord World Sport and Business Summit in Yekaterinburg, between May 15 and 20 in 2022.

More than 1500 delegates are expected at the vital gathering of stakeholders in the Olympic Movement, as well as 1000 organisations, more than 125 International Federations and more than 100 exhibitors.

The Summit will take place at the IEC Yekaterinburg-Expo and will include a number of important meetings and the vital chance to network with other key sporting contacts.

In 2023, the city will host the Summer World University Games.

"The Russian Federation will host a momentous edition of SportAccord in Yekaterinburg, so it is important that as many friends and colleagues as possible can gather in person from across the sporting world," said SportAccord President Raffaele Chiulli.

"We are immensely grateful for the collaborative support of our friends in Yekaterinburg, the Sverdlovsk region and the Russian Federation."

The Summit has been delayed twice due to the coronavirus pandemic.

Saint Petersburg will stage the 2023 edition of the men's International Ice Hockey Federation World Championship between May 5 and 21.

Two different arenas will host matches - including the existing Ice Palace - and 16 teams will compete.

The second arena will be the Peterburgsky Sports and Concert Complex, which is currently under reconstruction to ensure a lasting legacy from the event.

Plans include a capacity of more than 20,000 people with the venue taking on a multi-function purpose after the World Championship.

Russia will also stage the World Junior Ice Hockey Championships in Novosibirsk and Omsk in December of 2023.

"The World Ice Hockey Championship is a significant event for all fans of this sport in our country," said Russian Sports Minister Oleg Matytsin.

"Taking into account the rich experience of Russia in organising the largest international sports events, there is no doubt that we will hold the competitions at the highest level.

"Foreign athletes and fans will appreciate the hospitality of the host cities.

"I am also confident that the World Championships will contribute to the further development and popularisation of ice hockey, especially among the youth."

Games of the Commonwealth of Independent States

Kazan will host the inaugural edition of the Games of the Commonwealth of Independent States (CIS) between September 4 and 11 in 2021.

More than 3,500 athletes between the ages of 14 and 23 are expected to compete, across 16 different sports.

The countries taking part will be the nine member states of the CIS - hosts Russia, Azerbaijan, Armenia, Belarus, Kazakhstan, Kyrgyzstan, Moldova, Tajikistan and Uzbekistan - as well as associate state Turkmenistan.

Russia put forward the idea of the Games at a meeting in Tajik capital Dushanbe in 2018.

The Games will be held to strengthen the traditional friendly ties between the people of the countries involved, and have the aim of enhancing sporting prowess and giving athletes experience on the international stage.

It is also hoped that the event will encourage healthy lifestyles and respect for history and traditions.

A total of 15 venues in Kazan, which hosted the Summer Universiade in 2013, will be used for the event.

The Games were due to take place in August 2020 before being rescheduled due to the coronavirus pandemic.

A firebird has been chosen as the Games logo.

Yekaterinburg will host the 2023 edition of the Summer World University Games between August 8 and 19.

Russia will host the event for the second time, following Kazan's hosting of the Summer Universiade in 2013.

Moscow staged the Summer Universiade in 1973, but then the country was the Soviet Union.

Three animals have been selected as mascots - Yaggy the deer, Heaty the malachite and Cedry the sable.

Kazan will host the World Aquatics Championships for the second time in 2025, a decade after the city last did so.

The International Swimming Federation (FINA) awarded its flagship event to the capital of Tatarstan after the successful staging in Kazan in 2015, and knew the city was a stable and reliable choice.

Competition will return to the Kazan Arena with swimming, diving and water polo all part of the programme.

Julio Maglione, the President of FINA when Kazan was awarded the Championships in 2019, spoke of the city's "excellent team" and the "extraordinary knowledge" possessed by organisers.

Russia successfully hosted the FIFA World Cup in 2018 - showing off its credentials in staging the very biggest and best sporting events.

The tournament - featuring 32 teams and won by France - leaves a lasting legacy in Russia with several new stadiums built and others extensively renovated, leaving a network of world class venues across the country which are capable of hosting more major sporting events in the future.

New venues included the Spartak Stadium in Moscow, while the capital's famous Luzhniki Stadium was renovated.

FIFA President Gianni Infantino said Russia 2018 was the best edition of the World Cup ever held.

"For a couple of years, I was saying it would be the best World Cup ever, today I can say that with more conviction," he said two days before the final.

"A big thank you to the Russian people, the Government, President Putin, the local Organising Committee, the Russian Football Federation, everyone who made sure this would be the best World Cup ever.

"The perception of the world to Russia has changed.

"There were around one million people in Russia, they discovered a beautiful and welcoming country and people who are keen to show to the world that what is sometimes said doesn't happen here.

"A lot of preconceived opinions have changed because of this World Cup.

"Everyone has seen the true nature of Russia."

The combined attendance for the tournament was more than three million people, while organisers said the event added more than $14 billion to the Russian economy.

Interest in football among Russians increased from 48 per cent of the population in 2010 to 71 per cent in 2018, and benefits to industries such as tourism are expected to continue over the coming years.

The World Cup also saw the successful implementation of the FAN-ID system, under which foreign supporters with match tickets were allowed visa-free entry into Russia. This scheme is something which could be repeated at major sporting events in the country in future.

Eighty-four per cent of foreign fans surveyed said they had changed their opinion of Russia for the better following the World Cup, and 90 per cent claimed they would recommend visiting the country.

Russia will be a contender to host future editions of the Olympics and Paralympics, with Saint Petersburg and Kazan the leading candidates for a potential bid for the 2036 Summer Games.

Russian Foreign Minister Sergey Lavrov held a meeting with Tokyo 2020 Olympic medallists in Rostov, where discussions on the possibility of a bid for the Games were held.

"The bids are being prepared," Lavrov said, as reported by state-run news agency TASS.

"We have several cities - Saint Petersburg for sure, and I believe Kazan as well."

Moscow hosted the 1980 Summer Olympics and Paralympics and the 2014 winter versions were in Sochi.