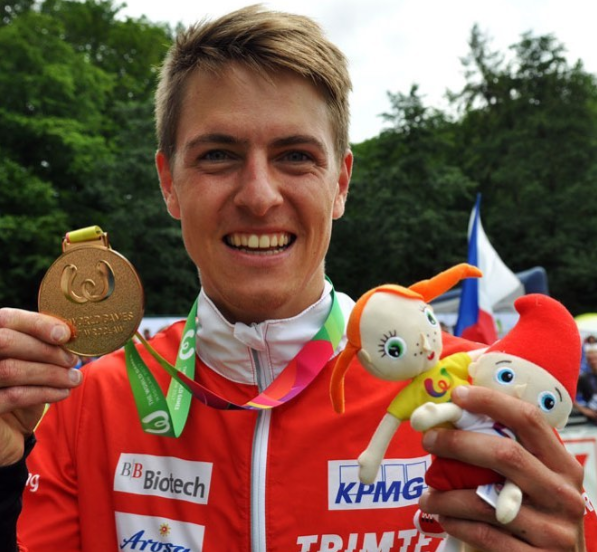 After winning bronze in yesterday's sprint competition, the Swiss competitor led a one-two for his nation after winning in a time of 34min 05.00sec at Trzebnica Aquapark.

His compatriot Florian Howald finished 38 seconds behind in 34:43.00 to seal a sublime day for Switzerland.

The Czech Republic's Vojtech Kral sealed the bronze medal but was way behind Kyburz in 35:20.00.

The gap between first and second was much shorter than the men's event with Russia's Natalia Gemperle crossing the line in second just three seconds behind in 34:47.00.

Sabine Hauswirth won a third medal of the day for Switzerland as she took bronze in 35:54.00.

Powerlifting competition finished today with the men's and women's super heavyweight finals at the National Forum of Music.

The United States and Ukraine dominated the medals in both events, winning five out of the six available.

Bonica Lough struck gold for the US in the women's competition after lifting 763 kilograms for a total of 600.71 points.

Ukrainian Tetyana Melnyk secured silver on 598.36 while another American, Liane Blyn, completed the podium on 590.07.

Oleksii Rokochiy of Ukraine prevailed in the men's event after amassing 632.50 points.

American Joseph Cappellino claimed silver on 613.13 while Kazakhstan's Nurlan Yeshmakhanov rounded out the podium with 603.70.

Invited sports, whose world federations are not members of the International World Games Association, will not be included in the final medal classification.

There was delight for hosts Poland as Artur Mikolajczewski set a World Games record in the men's lightweight 2,000 metres final with a time of 6:08.2.

Austria's Anna Berger prevailed in the women's lightweight 2,000m with her time proving to be a World Games record of 7:12.7.

The open weight crown went to Ukraine's Olena Buryak in 6:22.8, a world record.