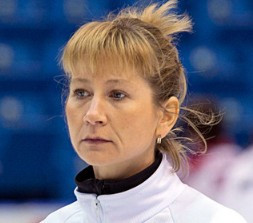 She is due to start in her new role on July 1 and will work with the WCF's competitions and development team to organise and deliver camps and courses, whilst also running international championships as a technical delegate.

Willms, a Canadian, competed in the curling at the 1992 Winter Olympic Games in Albertville in France, finishing third when the competition was still an exhibition event.

The multi-talent Willms is also a qualified mechanic and has previously worked with JD Motorsport in Formula-Renault.

On top of that she has served as national coach of the Latvian curling team, before joining British Curling for two years.

The WCF has also hired a new media officer, who is due to start on July 16.

Emily Dwyer, another Canadian, is a previous winner of the WCF's sports media trainee programme and has worked with the Perth-based world governing body as a freelancer for a number of previous championships, including this year's Winter Olympics in Pyeongchang.

Goodbye #Pyeonchang2018 ✨❄️ thank you @worldcurling for the amazing experience ?what an #Olympics what a crew, what a grind! pic.twitter.com/5k9XkSxcn6

WCF President, Kate Caithness revealed they look forward to the "fresh ideas" the two new recruits will bring to the roles.

"We are pleased to welcome Emily and Karri to the World Curling Federation", she said.

"With their previous experience in curling and enthusiasm for our sport they will be valuable assets to our competitions and development and media teams," she said.

Willms claimed she was "thrilled" to be offered the job at what is an "exciting time" for curling.

She said: "I believe my past experience in investment banking, motorsport racing and my curling background will be an added benefit and I am excited to start a new chapter in my career."

Speaking of her own appointment, Dwyer promised she will exploit, "the energy surrounding curling after the recent Olympic Winter Games to drive the new Curling World Cup to reach current and new curling fans.

"I’m really looking forward to creating engaging curling content for fans around the world, speaking to and sharing the athlete’s journeys while being completely immersed in a sport I love."