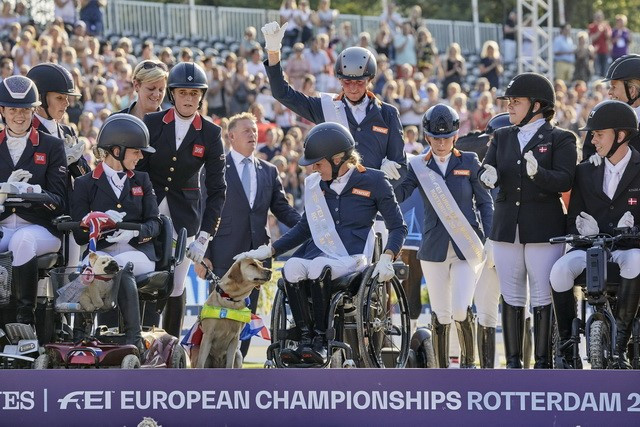 The Netherlands were crowned as winners of the International Equestrian Federation Para Dressage European Championship after Frank Hosmar and Sanne Voets won their respective grades in Rotterdam.

Hosmar scored 75.860 per cent on Alphaville N.O.P. in grade four with Voets and Demantur Rs2 N.O.P. scoring 77.150 per cent in grade five at Rotterdam Arena.

Those scores added to the marks set by team-mates Nicole den Dulk and Rixt van der Horst yesterday to give the host nation a winning total of 227.039 per cent.

The victory represents a second on the international stage in less than a year for the Dutch after they won at the World Equestrian Games in Tryon in the United States.

"From day one they've been performing very well, but then it's a new competition and you have no idea, and nothing is for sure," said an elated Chef d’Equipe Joyce Heuitink.

"I was actually a little bit nervous.

"I was really hoping we could equal the gold medal from Tryon and then you realise it's not so easy.

Tomorrow will see the final five gold medals of the Championships awarded, as the top eight riders in each grade perform their freestyle to music tests.