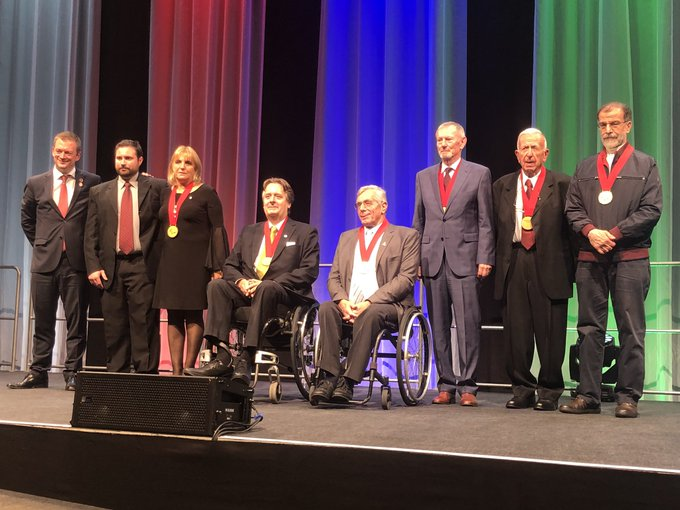 The International Paralympic Committee (IPC) has marked the organisation's 30th anniversary with a celebration event in Bonn.

"It is an absolute honour and privilege to welcome you all to this very special evening as we celebrate 30 fantastic years of the IPC," Parsons said.

"How fitting it is that we celebrate three decades of achievements here in Bonn, a city that has been our home for the last 20 years.

"So much progress has been made in the last 30 years and this is testament to the tremendous efforts of many, many people.

"We have achieved a lot in three decades, probably more than anyone expected with the resources available to us.

"But, what is most exciting is that I think we are only scratching the surface."

The event featured a look back at IPC history, with the organisation having been founded in Dusseldorf on September 22 in 1989.

Steadward joined Parsons on stage to discuss the early years of the IPC, where he outlined the importance of having a close relationship with the IOC.

The IPC say the celebration event also had a look forward to the future.

The three Paralympians gave views on what they hope the IPC can achieve in the next 30 years.

Six Paralympic Orders were awarded to conclude the evening.

The first was posthumously given to Jose Luis Campo, the former President of the Americas Paralympic Committee who passed away in October 2017.

Parsons paid tribute to his mentor, where he recalled preparations for the 2003 Parapan American Games.

"I remember back in 2003 when Santo Domingo could not organise the Parapan American Games, that Jose Luis Campo said: 'We will do it.'" Parsons said.

"And he delivered a Parapan a year after delivering a Para Swimming World Championships, both in Mar del Plata.

"I remember we had a three-sport programme, but with passion he kept adding sports and, by the end of the Parapan, we had nine sports.

"I cannot forget how happy he was when we delivered the Pan Am and Parapan Am Games in Rio in 2007 with the same Organising Committee.

"He also created the Youth Parapan American Games, he made a huge contribution to the athletes in the Americas.

"When I was elected IPC President in Abu Dhabi, he silently waited in the corner.

"He must have stayed there for over an hour to give me the last hug and it was the best hug of that General Assembly.

"It was difficult to accept and to understand that he had passed away.

"He had a heart attack in a fundraising event to fight cancer.

"That was Jose Luis Campo, the most generous man I ever met."