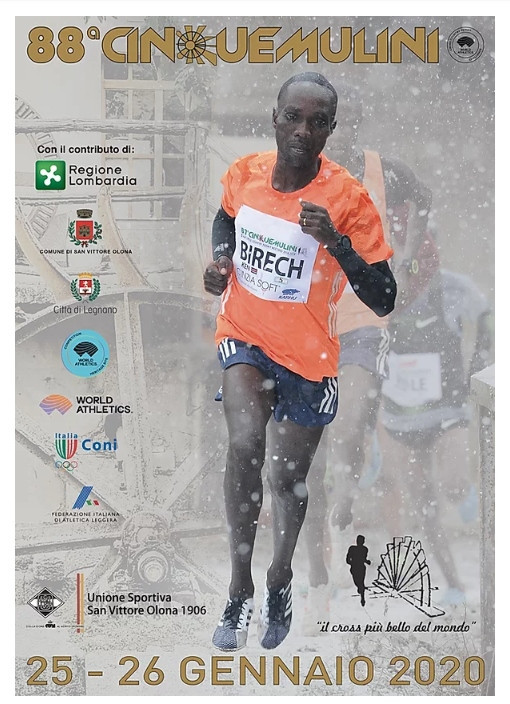 A World Athletics Heritage Plaque is to be presented tomorrow to organisers of the Cinque Mulini, the latest leg of the World Athletics Cross Country Permit series, to mark one of the oldest and most famous races in Europe.

The presentation, due to take place at 11.45am before the start of the women’s senior race in San Vittore Olona, will mark the first time that a Heritage Plaque will be unveiled.

Since the programme was launched and a public competition was opened to design the plaque in December 2018, 54 plaques have been awarded.

The race has been held in the Italian commune since 1933 and revolves around a number of water mills along Olona river, which lend the competition its name – meaning Five Mills in Italian.

Ethiopian teenager Tadese Worku, the star so far of this year's World Athletics Cross Country Permit series, will be the favourite at the 88th edition of this race.

Three of the top four finishers in the under-20 race at last year’s World Cross Country Championships - Worku, Oscar Chelimo from Uganda and Leonard Kipkemboi Bett from Kenya - will line-up in the men’s race.

Worku, who turned 18 last Monday (January 20), won the silver medal in Aarhus last March but has since established himself as the sport's leading cross country runner with back-to-back wins in the Spanish legs of the World Athletics Cross Country Permit meetings in Elgoibar and Seville.

A milestone will also be celebrated as the women’s race will mark its 50th anniversary with Bahrain's defending champion Winfred Mutile Yavi hoping to win again.

The 20-year-old, originally from Kenya, will face former compatriots Mercy Cherono, the 2013 World Championships silver medallist in the 5,000 metres, and Gloria Kite, third behind Yavi at Cinque Mulini 12 months ago.

Italian hopes will rest on Nadia Battocletti, winner of her second European Cross Country Under-20 title in Lisbon last month.