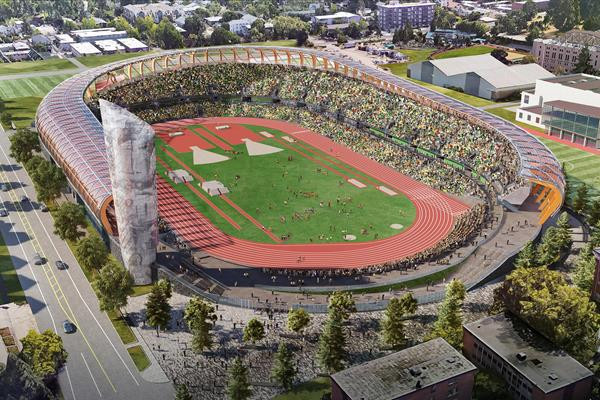 Hayward Field, the venue for the 2022 World Athletics Championships, has been formally handed over to the University of Oregon following a two-year reconstruction of the stadium.

University of Oregon President and chief executive Paul Weinhold confirmed to Oregon Live that it had taken formal possession of the stadium.

The venue has undergone significant renovation to host the Championships, which it was due to host in 2021 before the event was pushed back by a year owing to the impact of the coronavirus pandemic on the sporting schedule.

According to reports, the reconstruction project cost in excess of $200 million (£162 million/€179 million).

It was initially hit with setbacks as attempts to raise private money for a design featuring parts of the old stadium stalled, before new, more modern plans were unveiled when Nike co-founder Phil Knight became involved.

The capacity has grown to around 25,000, over double the limit prior to the renovation.

Eugene in Oregon had been scheduled to stage the World Athletics Championships in 2021.

The event was rebranded to Oregon 2022 following the decision to postpone the event, which has been rescheduled to take place between July 15 to 24 in 2022.