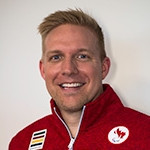 Canada's Paralympic snowboarder Curt Minard has announced his retirement from the sport.

The 41-year-old competed at the Pyeongchang 2018 Winter Paralympics, where he achieved top 10 finishes in both the SB-UL banked slalom and snowboard cross.

Minard is also an accomplished ice hockey player who won gold as part of the Canadian standing amputee team at the 2012 World Championships in Finland.

He has opted to retire after battling against injuries, particularly concussion.

"When you play at a high level and you suffer injuries, they take much longer to heal at my age," said Minard to the Vernon Morning Star.

"It's one decision that I have struggled to come to terms with.

"But after my fifth concussion and the aftermath that haunted my spirit and ability to get physically healed, the time has come to check my health first and look back on the journey and accomplishments that I have experienced."

Minard lost part of his left hand and wrist in an electrical contact accident in 2008.

He was electrocuted with more than 14,400 volts of electricity and approximately five amps of current.

This is about 500 per cent more than most humans can withstand before their bodies shut down.

In hospital, he suffered many complications, including a bursting artery in his left arm and a pulmonary embolism which both almost claimed his life.

He debuted on the Para-snowboard scene in 2016 and won three national titles.

In 2018, he won a snowboard cross bronze medal in the World Cup Final on the Pyeongchang course.

"I'm forever grateful for everyone believing in me and what I set out to accomplish for our programme and my athletic career," he added.

"The road to Pyeongchang was not a path that came easy but a path that I reflect on that showed the accomplishments and grit to sacrifice every piece of your well-being to possibly taste victory.

"Most important, it showed myself what determination was within and how much we all love our country."