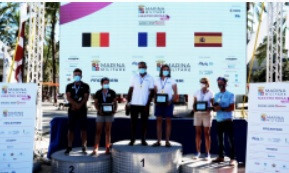 The race was sailed on L30 class boats, provided by organisers and was contested within the L30 class format of the mixed two-person offshore keelboat discipline.

World Sailing has applied for the discipline to be included as part of the Paris 2024 Olympic Games, and an announcement is expected later this year on whether the application has been successful.

France's team of Benjamin Schwartz and Marie Riou won the event in a time of 65 hours 46 min, 37 sec.

The Belgian pair of Jonas Gerckens and Sophie Faguet finished in second place, around 80 minutes behind France.

The Spanish team of Iker Martinez and Natalia Via-Dufresne, long time leaders of the race finished in third, an hour and a half behind the winners.

"It was a hard and complicated race where we made some risky choices that turned out to be some bad ones and some good ones," said Schwartz, in response to the victory.

"In the morning we found ourselves at the top of the fleet from where we controlled the race for the last few miles back to Genoa," added Riou.

The crews representing Italy, Germany, the Netherlands and Britain all finished in that order, with the Irish crew not finishing the race.