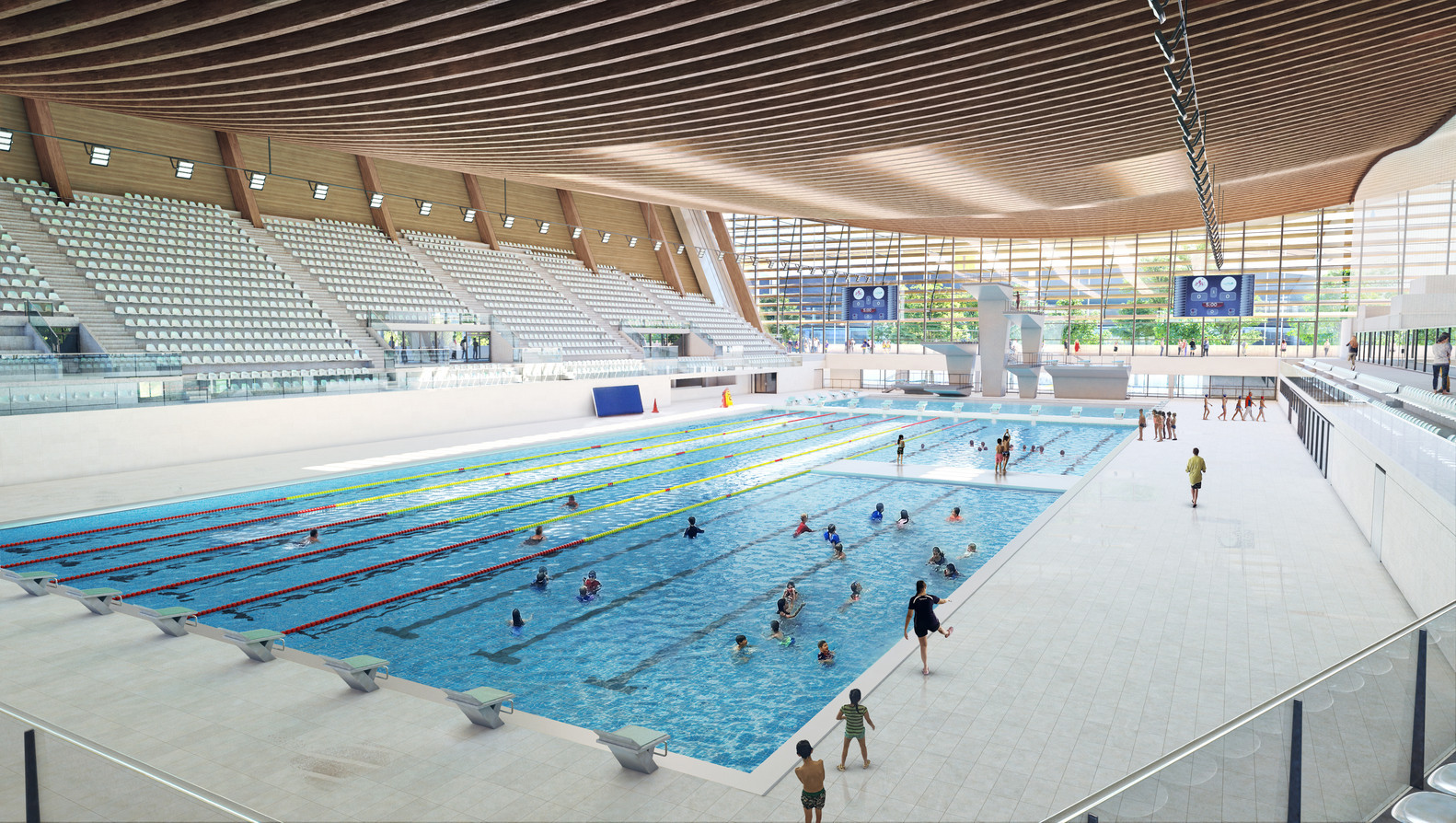 Architects VenhoevenCS and Ateliers 2/3/4/ have unveiled their plans for the Aquatics Centre for the 2024 Olympic and Paralympic Games in Paris after winning the competition to design the venue.

New images of the planned complex, one of only three venues being built from scratch for the Olympic and Paralympic Games in the French capital, have been released by Dutch-based VenhoevenCS and French company Ateliers 2/3/4/.

The centre will host diving, water polo and artistic swimming events during the Games and will be transformed into the Boccia stadium for the Paralympics.

A smaller training pool and a warm-up pool along with changing rooms, a bouldering wall, basketball courts and exercise rooms also form part of the proposals.

Topped with solar panels, the curved timber roof is set to be raised at the sides to accommodate seats for 5,000 spectators.

Constructed by Bouygues, the project in Saint-Denis is expected to cost €174 million (£157 million/$194 million).

After the Games the plan is to reopen the pool to the public in the summer of 2025 and use it to host events like the European and World Championships when temporary seating is reintroduced.

"In this immense cathedral dedicated to aquatic sports, there is no false ceiling or cladding," said VenhoevenCS and Ateliers 2/3/4/.

"The roof, stretched with wooden beams, magnifies the space thanks to its dynamic curves that make it both intimate and airy.

"Adapted to open heights and optimal visibility from the stands, this sculpted membrane seems to move and undulate like a living organism."

The design also includes an A1 motorway-spanning pedestrian bridge that provides a link to the Stade de France, which will host the Paris 2024 Opening and Closing Ceremonies and the athletics events.

VenhoevenCS described the Aquatics Centre as "a place to learn how to swim, to practice sports, to relax and meet".

The architects also plan to create space for 100 trees to be planted and believe the solar roof will cover "25 per cent of all required electricity production which is the equivalent of the electric power use of 200 households".

A larger 15,000-seater venue had been set to be built for Paris 2024 to stage the main swimming races but would be disassembled at the conclusion of the Games.

However, organisers are considering scrapping the temporary facility and staging events at an existing venue in a bid to cut costs.