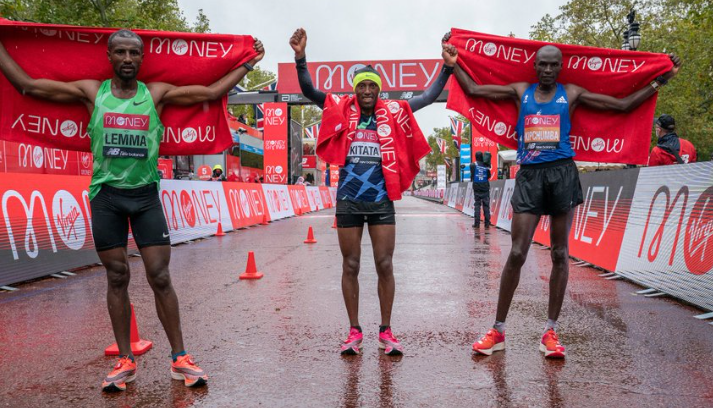 Newly established men’s London Marathon champion Shura Kitata paid fulsome tribute to race favourite Eliud Kipchoge today – and revealed that his own coach had tested positive for COVID-19 shortly before he was due to travel with him.

Asked during his virtual post-race press conference if he had been surprised to beat Kenya’s Olympic champion and world record holder, who had not lost since 2013 and last year ran the distance in 1hour 59min 40sec, the 24-year-old Ethiopian responded: "Still Kipchoge is the king of us, even if we beat him.

"Yesterday I think the weather conditions were affecting him too much.

“But today and tomorrow, he is king of athletics."

?️"If you want to enjoy sport then you have to accept the results."

An off day for the greatest of all time today but @EliudKipchoge remained gracious in defeat. #LondonMarathon #The40thRace pic.twitter.com/a2yocYdsQ9

Kitata said that his coach, Haji Adilo, had tested positive for coronavirus a few days before he was due to fly to London, and that he had immediately gone into quarantine.

"On the day my coach was tested for COVID-19 we were talking together, nothing was happening, but after that test I did not see him physically,” Kitata said.

"He was calling me every day, asking me how my preparation was going.

"Nobody told me he was affected with coronavirus at the time.

"I also missed a lot of training with my partners.

"So to arrive at this position – the competition is not only with athletes, but coronavirus.

"So I am winner today over two things – coronavirus and the London Marathon – and I am very happy.

"I am willing my coach to be well again and we can be together for races next year."

Adilo was reported to have lost his sense of smell, but is said to otherwise be in good health.

A London Marathon spokesperson confirmed to insidethegames that Adilo and Kitata had only had phone contact for an extended period.

They said: “Like all in the bubble, he had a COVID test four/five days before travelling, another on the day of arrival and everyone in the bubble (athletes, support staff, organisers etc) was tested again on Friday October 2.”

The spokesperson added that none of the runners had tested positive for COVID-19 during their time in the bio-secure bubble enveloping the meeting hotel and racing arrangements, and confirmed that Kipchoge, like everyone else, was tested three times and provided three negative results.

Kipchoge, who finished eighth in 2:06:49, told the BBC immediately after the race that he had been troubled by a blocked right ear, and added that he had suffered some cramp in his hip.

He remained philosophical about the outcome: "You know what they say – ‘if you want to enjoy sport, you have to accept the result.’ So I accept the result. I congratulate those who are the top finishers. And that’s how to enjoy the sport.”

The winners of the 2020 Virgin Money London Marathon answer questions from the media.#LondonMarathon #The40thRace https://t.co/5Vn0Mt7Jr7

Kitata, who finished second behind Kipchoge in the 2018 London Marathon before placing fifth as the Kenyan retained his title last year, added:

“Kipchoge is the greatest person in the sport.

“He beat two hours for the marathon when science said it was not possible.

“In his life, he has changed our sport.

“He is our hero, he is our winner.

“I would give to him my position, but this is life, this is sport.

“In my heart, still he is champion.

“I want to say to Kipchoge he can do more than he did yesterday and he can win again.

Last year Kitata posted a tweet saying that he had not eaten breakfast, but only had some fruit, and thought he would be OK, but that he had ended up being “very hungry” adding: “At 35/36km I felt my stomach touching my back, super hungry. Went out of energy. I will be back and win the race.”

“Last year I couldn’t run at the end of the race,” he said.

“This year I learned from that and prepared myself to eat something for breakfast. I had had porridge, bananas and bread.”

Kitata, who is married with two young children, comes from farming stock and said he had taken up running when he had to go back and forth to school, which was six kilometres from his home.

Meanwhile Kenya’s world record holder Brigid Kosgei, who retained her women’s title in 2:18:58, reflected on how the conditions had frustrated her ambition of breaking the women-only world record of 2:17:01 set by compatriot Mary Keitany in winning the 2017 London Marathon.

“Yesterday we tried to beat 2:17:01 but you know it was hard, running in rain and coldness,” she said.

“I did my best but I did not make it.

“I wish the weather had been like it is today.

“I hope I will be able to prepare better next year and to come back and run faster.”

Kitata also revealed the details of the advice he had had before the race from his training partner Kenenisa Bekele, whose win in Berlin last year in 2:01:41 was just two seconds off Kipchoge’s official world record and who announced his withdrawal from the race on Friday because of a calf injury.

“A week before the races he told me ‘If my leg gives me a chance we will compete together. But if I cannot participate I will advise you how to win the race.’

“What he told me was ‘firstly, don’t push like you did in other races before at the beginning, try to wait until the last part.

“‘Make sure you don’t get pushed by anyone and fall down, but don’t go to the front for the first 35 kilometres.

“‘After 35 kilometres try to see how you feel. If somebody can run with you, don’t push again until the last part of the race.’

“What he advised me I used. I felt some energy inside my legs, and I pushed it.

“My coach also advised me, and I want to say to both of them, ‘Thank you’, again and again.

“I am willing my coach to be well again and we can be together for races next year.”

Reflecting on his success in the men’s wheelchair race, Canada’s Brent Lakatos said that home racer David Weir, who had been seeking his ninth win in his 21st London Marathon, had congratulated him shortly after he crossed the line.

“David had said beforehand that he thought it would be a sprinter’s race," said Lakatos.

“The course was very flat and the race contained lots of short, sharp sprints, so that favoured someone like me.”