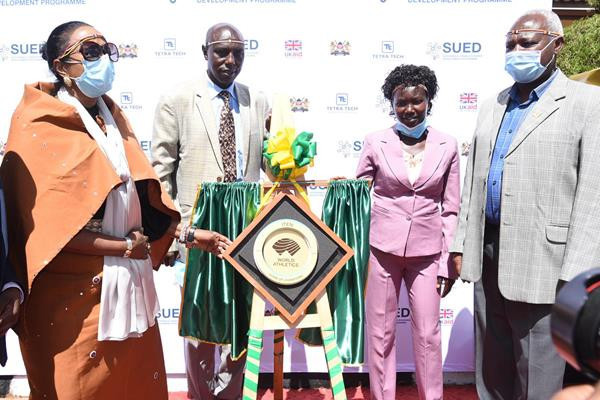 World Athletics Heritage Plaques have been officially presented to the Kenyan town of Iten and the Fukuoka International Open Marathon Championship in Japan.

Unveiling ceremonies were held in Iten and Fukuoka as both Plaques, originally awarded by World Athletics President Sebastian Coe in May last year and this October, were presented to local dignitaries.

Since the Plaque programme was launched in December 2018 by Coe, 60 Plaques have so far been announced across the world.

It is awarded for "an outstanding contribution to the worldwide history and development of the sport of track and field athletics and of out-of-stadia athletics disciplines such as cross country, mountain, road, trail and ultra-running, and race walking".

Iten, which calls itself the "Home of Champions", is located along the road between Eldoret and Kabarnet and the top athletes from there include Olympic medallists Ezekiel Kemboi and Moses Kiptanui and world record holder Mary Keitany.

Dignitaries led by Alex Tolgos, the Governor of Elgeyo Marakwet County, Kenya’s Cabinet Secretary for Sport Amina Mohamed and Athletics Kenya President Jackson Tuwei were among those who attended the Plaque-awarding ceremony.

They were joined by the British High Commissioner to Kenya, Jane Marriott, and Brother Colm O'Connell, the Irish priest known as "the Godfather of Kenyan running".

"We have unveiled this plaque today because it's an honour to the whole country and subsequently the entire continent," Mohamed said.

The Plaque will be permanently displayed in the Governor's office in the heart of Iten town.

The Fukuoka International Open Marathon Championship, which was founded in 1947, was one of the six historic races recently announced as being awarded the World Athletics Heritage Plaque.

Appropriately, on Sunday (December 6), race organisers took the opportunity of the staging of the 74th edition of the Fukuoka Marathon to hold their ceremony at which their plaque was unveiled.

The ceremony was led by Hiroshi Yokokawa, a World Athletics Council member and President of the Japan Association of Athletics Federations.

The marathon organisers are working with the city to find a permanent public site for the Plaque, which is currently on display at the offices of the race organisers in Hakata-ku, Fukuoka.