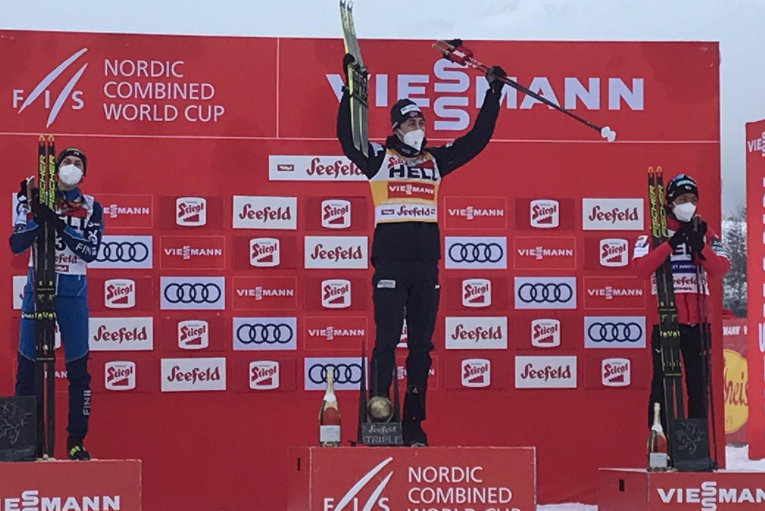 Jarl Magnus Riiber had to fight off strong challenges from Finland’s Ilkka Herola and Akito Watabe of Japan before claiming a second consecutive Triple victory at the Nordic Combined World Cup in Seefeld, Austria.

Having earned victory on the two previous days at this prestigious International Ski Federation (FIS) event, the Norwegian went into the concluding 15km Gundersen cross-country race with a big advantage, starting 38 seconds ahead of Watabe and 1min 8sec ahead of Herola.

However, the destination of the prize came down to a finish line sprint, with Riiber scrambling home to win in 37min 19.1sec, just 1.3 seconds ahead of Herola.

Watabe, who won the Triple title three years ago, was third, just 3.2sec behind.

The day had begun with the final jumping round in sunshine, and only six jumps were registered under 100 metres.

Riiber managed 108 metres, even though the landing was not quite perfect.

Watabe had the cleaner jump but only reached 105m, and so 38 seconds separated the two athletes at the start line.

Herola jumped 105m as well but did not manage to put a telemark landing in and lost valuable seconds in the process.

The best jump of the day was set by France’s Laurent Mühlethaler, who achieved 110.5 metres and would have won the jumping round without his deficit of 33.1 Triple points from the previous day.

As such he had a delay of two minutes and eight seconds at the start.