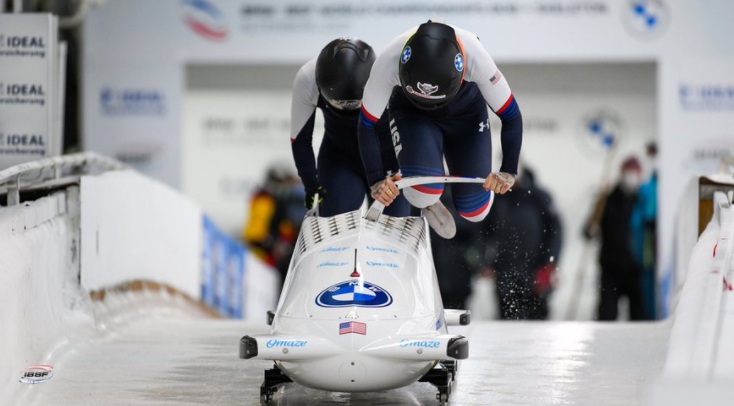 The two-time Olympic gold medallist, who won this title in Canadian colours in 2012 and 2013, returned for another gold last year representing the United States, with brakewoman Lauren Gibbs.

This time round she is partnered by former world indoor 60 metres hurdles champion Lolo Jones.

Home athlete Kim Kalicki, last year’s world junior champion, surprised the field to secure silver in 2020 and she goes into tomorrow’s concluding third and fourth runs in the same position.

One place behind is her compatriot and successor as world junior champion, the European champion Laura Nolte.

Humphries, who followed up her 2010 and 2014 Olympic wins by taking bronze at Pyeongchang 2018, set the best time on both of today’s runs to finish 0.34sec clear in the lead at a course that was closed to spectators because of pandemic restrictions.

Kalicki, partnered by Ann-Christin Strack, is narrowly ahead of Nolte and brakewoman Deborah Levi, who are 0.42 behind the leaders.

Fourth in the intermediate ranking and 0.40 second behind a medal place is the 2015 and 2017 world champion Elana Meyers Taylor of the US, accompanied  by push athlete Sylvia Hoffman.

The two-woman finale will take place tomorrow afternoon following the morning’s opening runs for the two-man racing, where Germany’s World Cup champion and double Olympic champion Francesco Friedrich, in company with Alexander Schüller, will seek a seventh successive world title in this discipline.