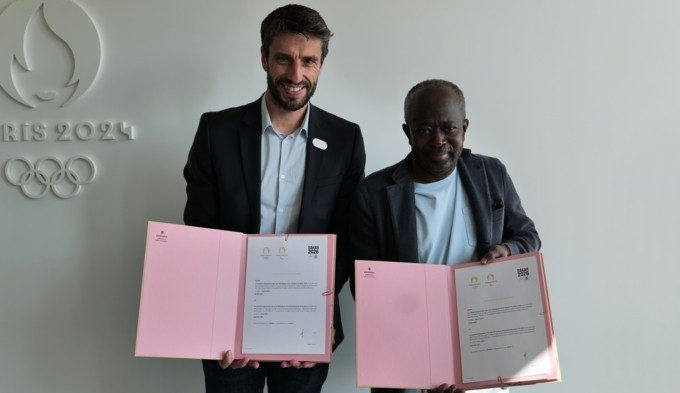 The Paris 2024 and Dakar 2026 Organising Committees have signed a fresh collaboration agreement, extending cooperation agreed upon before the four-year postponement of the Youth Olympic Games.

The Senegalese capital's staging of the Youth Olympics was pushed back from 2022 to 2026 in July 2020, with the International Olympic Committee (IOC) blaming COVID-19 and the associated delay of the senior Tokyo 2020 Games to 2021.

Dakar and Paris Organising Committees had signed a cooperation agreement 10 months earlier, and their respective Presidents have now committed to a further alliance.

The agreement remains focused on delivering successful events and burnishing their legacies through the sharing of ideas, best practices and equipment.

Secondment programmes are also planned, with officials from Dakar 2026 poised to be immersed in Paris 2024 now that it is taking place before the next installment of the Summer Youth Olympic Games.

"With this agreement, we give meaning and practical content to the sports cooperation that goes beyond our two Organising Committees," Dakar 2026 President Mamadou Diagna Ndiaye said from Paris.

"We have the opportunity to write a historic page of Olympism together, through memorable Games in Paris and Dakar, which will leave a permanent legacy.

"Dakar 2026 is about the world's youth being celebrated by Africa and we are delighted that Paris 2024 is contributing to this."

Dakar 2026 is set to be the IOC's first Games ever staged in Africa.

It has held the full Olympics on each of the five other populated continents.

Officials from Dakar 2026 met with the French Development Agency (AFD) and Clichy-sous-Bois City Council as part of their trip to Paris, as well as visiting the site of the Olympic and Paralympic village.

"The signing of this agreement marks a new stage in our privileged relationship with Dakar 2026," Paris 2024 President Tony Estanguet said.

"Since the creation of the Dioko Alliance in 2019, we have already launched many projects.

"The postponement of the Dakar Youth Olympic Games from 2022 to 2026 allows us to further raise the level of ambition of the Alliance and to ensure that a Dakar 2026 Games is a beneficiary of the legacy of the Paris 2024 Games.

"The next two years will allow us to forge closer links and explore new synergies between our two projects.

"After Lausanne 2020 and Tokyo 2020, we hope that our agreement with Dakar 2026 marks a new step towards promoting a new model of cooperation between Organising Committees for greater efficiency in the organisation of the Games."

Paris 2024 coordinates the Dioko Alliance, which aims to have French organisations work to ensure the success of Dakar 2026.

The Dioko Alliance will expand this year, according to Paris 2024.