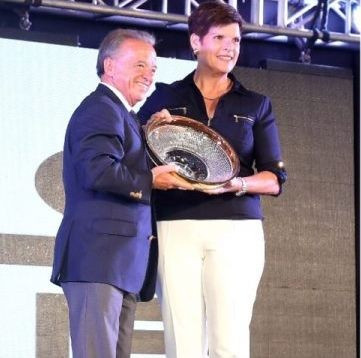 IFBB President Rafael Santonja travelled to Hoevertsz’s native Aruba to present the award, which recognises her "fruitful career in sport and her decided support to the international promotion of sport and healthy lifestyle".

He did so during the inaugural edition of the Ben Weider Legacy Cup, held in the resort area of Palm Beach and organised by the Aruba Bodybuilding and Powerlifting Association (ABPA).

It comes after the Prime Minister of Aruba, Mike Eman, received the IFBB distinguished services award in recognition of his support for the Legacy Cup.

Eman received the award in a ceremony on the Caribbean island on behalf of Santonja.

John Arendsz, who organised the Legacy Cup, presented Eman with the award as part of his role as President of the ABPA.

Hoevertsz is currently standing for one of the two vacant positions on the IOC Executive Board along with Peru's Ivan Dibós, Nigeria's Habu Gumel, Switzerland's Denis Oswald and Hungary's Pal Schmitt.

Fiji's Robin Mitchell is likely to run unopposed for the position representing the Association of National Olympic Committees, replacing Ireland's Patrick Hickey who resigned with immediate effect on Saturday (September 9).

An election for new IOC Executive Board members is scheduled for the final day of the IOC Session tomorrow.

Hoevertsz, 53, represented Netherlands Antilles in synchronised swimming at the 1984 Olympic Games in Los Angeles before joining the IOC in 2006.

She was a member of the Coordination Commission for Rio 2016 and, like Gumel, is currently serving in a similar position for Tokyo 2020.

Hoevertsz is also a member of the Pan American Sports Organization Executive Committee, and was the first-ever female on the panel when elected in 1998.

She has acted as an IOC scrutineer at ballots including the process to choose the host city of the 2022 Winter Olympic and Paralympic Games in 2015, when the vote had to be re-staged due to problems with the electronic system.