Taipei 2017: Day one of competition at the 29th Summer Universiade

Taipei 2017: Day two of competition at the 29th Summer Universiade

Taipei 2017: Day three of competition at the 29th Summer Universiade

Taipei 2017: Day four of competition at the 29th Summer Universiade

Taipei 2017: Day five of competition at the 29th Summer Universiade

Taipei 2017: Day six of competition at the 29th Summer Universiade

Taipei 2017: Day seven of competition at the 29th Summer Universiade

Taipei 2017: Day eight of competition at the 29th Summer Universiade

Taipei 2017: Day nine of competition at the 29th Summer Universiade

Taipei 2017: Day ten of competition at the 29th Summer Universiade

Taipei 2017: Final day of competition at the 29th Summer Universiade 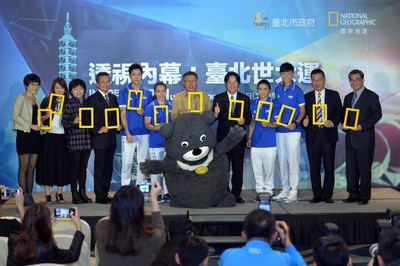 Taipei Mayor Ko Wen-je has hailed a "miracle summer" for Taiwan, after a watching a documentary dedicated to this year’s Summer Universiade.

The Universiade took place in Taipei from August 19 to 30, marking the largest the multi-sport event staged in Taiwan’s history.

International University Sport Federation (FISU) President Oleg Matytsin hailed the Universiade as having been a wonderful advert for Taipei, prior to its conclusion.

Ko has reiterated that view, having been shown a documentary which showed Taipei’s preparations for the event.

According to the Taipei Times, Ko was emotional after watching the programme, with the Mayor claiming Taipei had proved doubters wrong in staging the Universiade.

Ko claimed the successful hosting of the event had raised confidence in the city.

"It was a Taiwanese miracle in the summer of 2017, as the nation had the chance to hold the largest international sports event it has ever held and become more united," he said.

"We joined forces and overcame difficulties to make history, so I think the Universiade will become an unforgettable memory for many Taiwanese."

The documentary was produced by Taipei’s Department of Information and Tourism and the National Geographic Channel.

It was shown on Taiwan’s National Geographic Channel yesterday and is reportedly due to be shown in 42 Asian nations in the coming weeks.

The hosts finished the Universiade with 26 gold, 34 silver and 30 bronze, which saw them finish third on the medals table.

Due to their success, the three policies are expected to be implemented by Taiwan Premier William Lai.

This will include an amendment to ensure competitions will be conducted in a transparent manner.

It has been claimed Lai will also help to change the budget system to help support athletes and coaches.

The aim is to ensure athletes will be supported when they compete internationally, without being adversely affected financially.