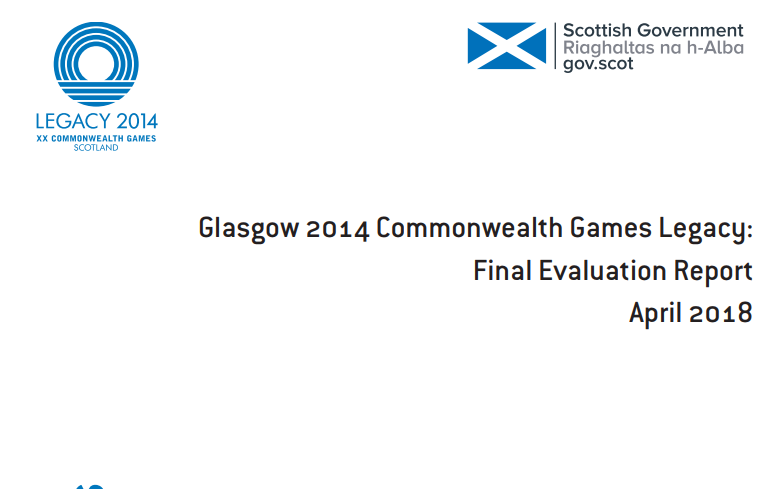 A report has found that sports participation in Glasgow has not improved in the four years since the city hosted the Commonwealth Games, although it did highlight other benefits of the city staging the event.

The report, compiled by Glasgow City Council and the Scottish Government, found that visitor numbers are up and that venues used during the Games remain popular,

It also revealed that many young people had found jobs and work experience created as a result of the event.

The Athletes' Village had also been successfully transformed into housing for local people, many of which were rated positively.

Sports participation levels across Scotland remain stable, however, it concluded, so there has not been an obvious benefit.

The report concluded that the Glasgow Games "had not resulted in a step change in population levels of physical activity in Scotland".

Glasgow 2014 was the largest multi-sport and cultural event ever held in Scotland.

Around 7,000 athletes and officials from 71 nations and territories participated in 17 sports and 261 medal events.

The report outlined many positive legacies.

This particularly involved the Athletes' Village housing, where the "predominant view" among those owning and renting houses was that it was a harmonious place where people from different backgrounds got on well together.

The report recommended, though, that organisers of major sporting events consider downscaling their stated legacy ambitions to avoid a failure to meet targets.

"This final report on the Glasgow 2014 legacy demonstrates that with effective planning, governance and delivery legacy effects are possible, but not automatic or guaranteed," the report concludes.

"Depending on the social and economic challenges faced by a potential host city or nation, hosting major events can be used a ‘catalyst’ for what national and local government and their partners seek to achieve."

"An honest assessment of what can be directly achieved by hosting a major event and what might be possible with the right support or additional investment is critical.

"Ambitious claims about long term economic impact and population level changes in physical activity may need to be tempered, while other impacts on, for example, international reputation, civic pride and regeneration - where that applies - are potentially achievable.

"The early planning of the Glasgow 2014 legacy and careful thought about the long term contribution of Games investment have been acknowledged nationally and internationally and the experience has been invaluable in preparing for a new multi-sport event in 2018."

The report has been published to coincide with the current Commonwealth Games currently taking place here.

It also coincides with four months before Glasgow is due to co-host the inaugural European Sports Championships from August 2 to 12.

Aquatics, cycling, gymnastics, golf, rowing and triathlon events will be held in Scotland - with diving in Edinburgh and all others in or around Glasgow - while German capital Berlin hosts athletics.

The full report can be read here.