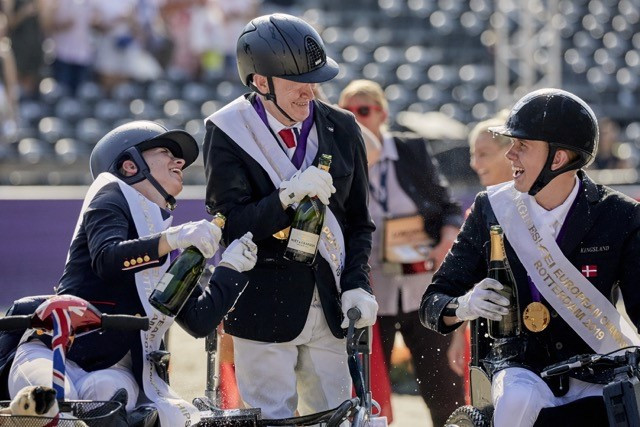 Hosmar's gold in the grade five freestyle represented a third of the week at Rotterdam Arena as he topped the standings with Alphaville N.O.P on 79.900 per cent, as Sophie Wells of Britain, riding C Fatal Attraction, finished second on 78.375.

The bronze medal went to Michele George of Belgium on Best of 8 with 74.720.

Voets, atop Demantur Rs2 N.O.P, claimed the grade four freestyle title with a score of 79.720 per cent to win from Sweden's Louise Etzner Jakobsson.

Jakobsson and Zernard scored 73.775 for silver as Manon Claeys on San Dior completed the podium for Belgium with 73.355.

"It's hard to be the favourite and the hardest part is the pressure you put on yourself.

"I was amazed by the atmosphere.

"It's been an amazing week and I'm going to enjoy every second of the medal ceremony."

It was raining gold in the Freestyle as Jens-Lasse, Tobias, Sanne & Frank added to their Individual titles but Georgia Wilson took Grade II Freestyle at her 1st Championships!! ??
⠀https://t.co/7bVZd6DRFh pic.twitter.com/FYDNVghFfo

Elsewhere there was a gold medal for Britain's Georgia Wilson in her first major international competition, triumphing in the grade two freestyle event.

Denmark’s Tobias Thorning Joergensen added a second gold of the week with victory in the grade three freestyle final.

A second bronze of the week went to side-saddle rider Barbara Minecci of Belgium.

Norway's Jens-Lasse Dokkan added the grade one freestyle title to the individual gold he picked up earlier in the week, scoring 80.193 per cent on Aladdin.

Sara Morganti from Italy and Royal Delight were second with 79.273 as Latvian Rihards Snikus claimed the bronze medal on King of the Dance, with 77.387 per cent.