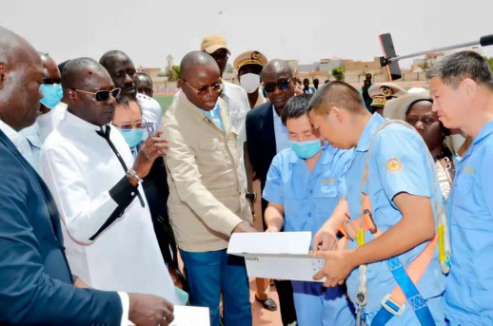 China has confirmed it is funding the renovation of eight venues for the Dakar 2026 Summer Youth Olympic Games.

A ceremony was held at the Stade Alboury Ndiaye in Louga to mark the start of the project between Senegal and China.

The stadium is one of the venues which will receive funding from China to aid renovations.

The venue’s sound system, synthetic pitch, supply of nets and maintenance equipment are all included in the project.

Senegal’s Sports Minister Matar Ba was present at the ceremony, with the official hailing cooperation between the nation and China.

The #China🇨🇳-aided renovation project for 8 stadiums in #Senegal🇸🇳has formally started recently, which will create conditions to host international events in the future, including Dakar 2026 Youth Olympic Games. pic.twitter.com/4mcY15OXOQ

The Chinese Embassy claimed local officials had thanked the Chinese Government for their support for the Dakar 2026 Summer Youth Olympic Games.

The renovation of eight stadiums, it is claimed, will improve sports infrastructure for young people locally and offer training opportunities for local workers.

Chinese officials are expected to oversee the renovation work at the respective venues.

China has invested heavily in infrastructure projects in Africa in recent years, although concerns have been raised over the indebtedness of African nations to China.

China has also funded infrastructure projects in the Pacific region, with Samoa and the Solomon Islands receiving support in the build-up the 2019 and 2023 Pacific Games, respectively.

The agreement will see Dakar’s preparations for the Summer Youth Olympic Games receive support from both China and France.

A Paris 2024 and Dakar 2026 collaboration agreement was renewed in March.

The Senegalese capital's staging of the Youth Olympics was pushed back from 2022 to 2026 in July 2020, with the International Olympic Committee (IOC) blaming COVID-19 and the associated delay of the senior Tokyo 2020 Games to 2021.

The Dakar and Paris Organising Committees had signed a cooperation agreement 10 months earlier.

Paris 2024 coordinates the Dioko Alliance, which aims to have French organisations work to ensure the success of Dakar 2026.