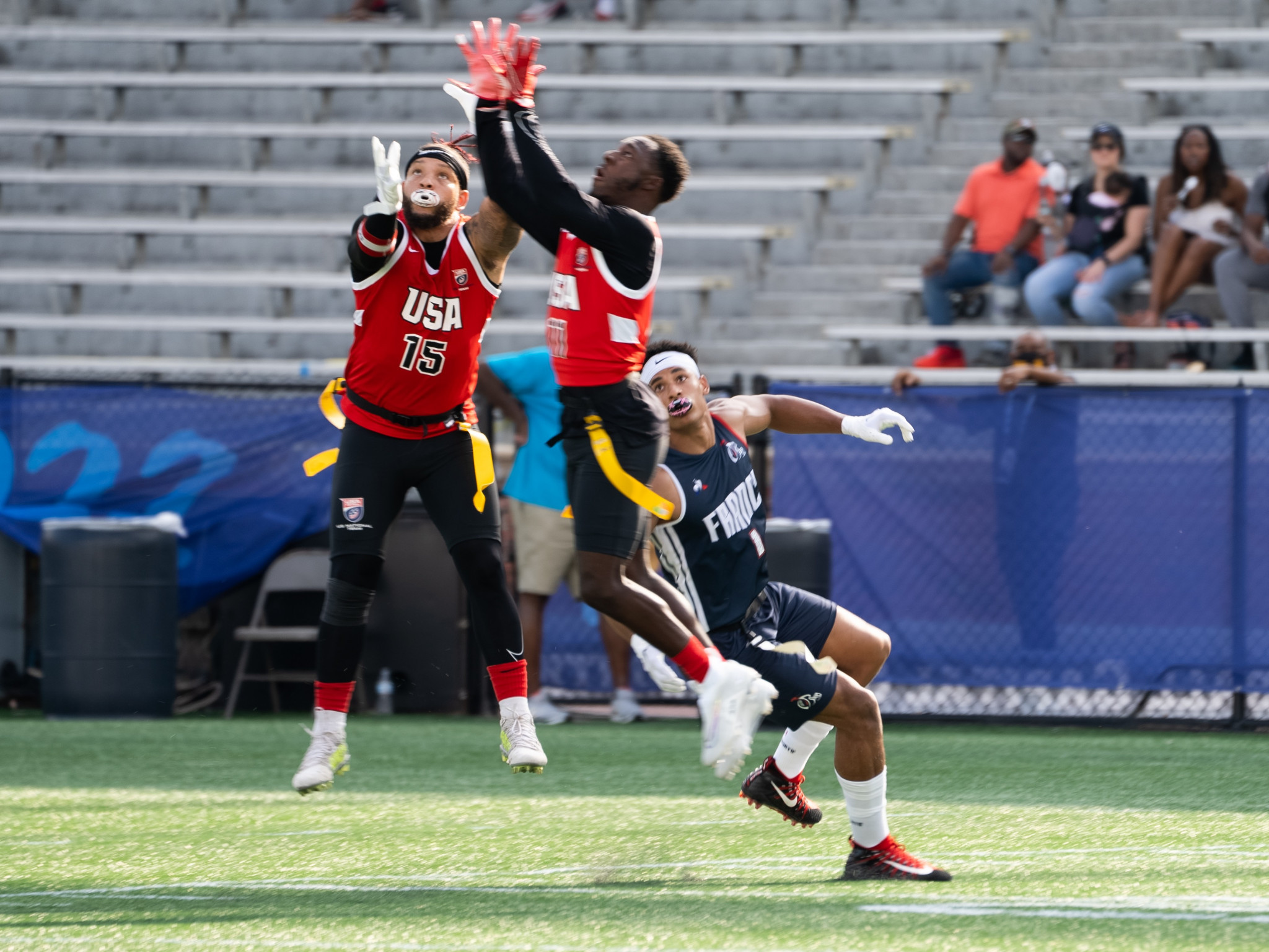 Group stage matches in the flag football competition concluded at the Birmingham 2022 World Games, with hosts the United States easing into the men's and women's quarter-finals.

The United States won the opening game on the second day of action at Legion Field, defeating Panama 35-14 in the men’s preliminary round Group B.

After getting their campaign off to a fine start yesterday with a 38-18 victory over France, the US looked in confident mood as they took an early lead.

Johnny Rembert scored the American team’s first point inside the opening five minutes before Panama got within a point at 7-6 with a touchdown from Jofiel Rogers.

Rembert struck again for the US before Panama edged in front for the first time with a score from Ricardo Jesus Quijano.

Trailing 14-13 at the break, the US responded in fine style, scoring 22 unanswered points in the second period.

Quick-fire scores from Darrell Doucette and Bruce Mapp put the US 21-14 in front before the two added further points with 10 minutes to go.

Doucette then put the icing on the cake when he touched down again.

The US followed it up with a comfortable 32-7 victory over Denmark, Doucette notching a rushing and a receiving touchdown.

The Danes' 20-13 win against France earlier in the day ensured they went through in second place.

Panama finished with a 34-13 triumph over France to secure third place.

Germany await the US in the quarter-finals, after they finished bottom in Group A with a third consecutive defeat, this time 30-14 to a Mexico side who were also previously winless.

Italy finished the group stage with three wins, triumphing 34-27 over Austria in a battle between the top two after Jared Lee Gerbino touched down from Luke Zahradka's pass.

Austria are set to face Panama in the quarter-finals, with the winner facing the US or Germany in the last four.

Denmark take on Mexico and Italy have been pitted against France in the other half of the draw.

The US secured top spot in Group A in the women's tournament, winning their third match 39-13 against France.

Panama overcame Austria 26-19 in the other game in Group A to clinch second place.

Mexico finished with an impressive record in Group B, thrashing Brazil 42-6 and Italy 49-0 on the second day to secure top spot.

Japan recovered from their defeat to Mexico yesterday to progress in second, beating Italy 19-14 and Brazil 25-20.

The US are set to face Brazil in the quarter-finals after they finished bottom of the group, with Panama taking on Italy in the same half of the draw.

Mexico are due to play France, with Japan against Austria completing the quarter-final line-up.

Men's and women's quarter-finals are scheduled for tomorrow.