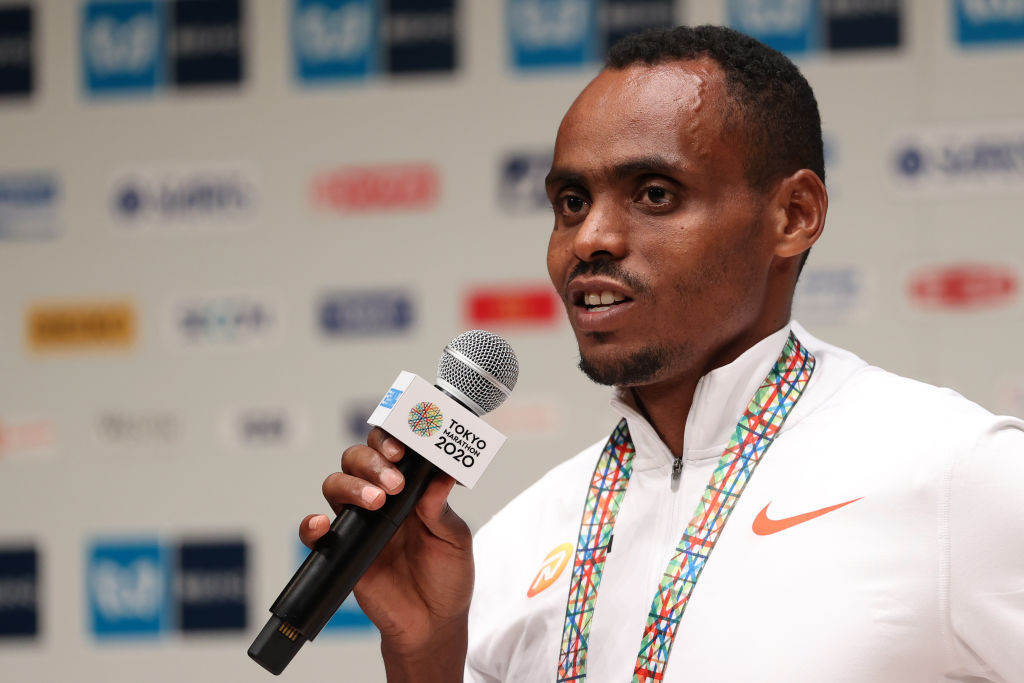 Birhanu Legese, the third-fastest marathon runner of all time, will seek to mark his London Marathon debut this Sunday (October 3) by breaking the course record.

The 27-year-old Ethiopian’s personal best of 2 hours 2min 48sec, set in finishing second to compatriot Kenenisa Bekele at the 2019 Berlin Marathon, is just 11 seconds slower than the mark of 2:02:37 set by Kenya’s world record-holder Eliud Kipchoge in winning his fourth London title in 2019.

"lt depends on the weather on the day, but if the weather is good I plan to break the course record and that's my target and I have prepared for that," Legese, twice a winner of the Tokyo Marathon, said at today’s pre-men’s elite race press conference.

And Legese, who missed the Tokyo 2020 marathon after being unable to run in the Ethiopian trials because of injury, heard encouraging news from alongside him as his compatriot Shura Kitata - who defeated a field including Kipchoge to win last year’s elite-only, loop race - reported some injury concerns.

"I have some leg problems but I am still preparing and looking forward to the race," said Kitata, who sprinted clear of Kenya’s Vincent Kipchumba in driving wind and rain to win last year's race, in which an out-of-sorts Kipchoge finished sixth.

Kitata's ambitions of pushing on to Olympic success in Tokyo ended with him dropping out of the Tokyo 2020 marathon after 10 kilometres.

"I was prepared very well before the Olympics," he explained.

"But two weeks before I had a hamstring injury which was a big problem for me.

"I have prepared well for the London Marathon though and I am now feeling ready to run."

Asked if he was now clear of his hamstring trouble, he responded: "Hamstring pain is not really easy and when it’s a very fast speed there might be some problem.

Kitata’s triumph, which earned him huge plaudits back home, was certainly not a flash in the pan as he finished second in London in 2018 and fourth in 2019.

Meanwhile Legese reflected upon the return to normality for the event this year following the COVID-19 pandemic, with the race being run on the traditional course with spectators allowed and an overall field of around 40,000 runners.

"The last 18 months have been tough for everyone," he said.

"I am pleased now everything is turning back to normal and I will be very happy to hear the cheering of the crowd.

"When you hear that it encourages us a lot.

"When people are standing watching us it makes a big difference, our speed increases, and we are encouraged.

"It makes it really great for us, and for all the other runners in the field."

Evans Chebet, who won last year’s Valencia Marathon in 2:03:00, will be carrying the Kenyan banner against two runners from its traditional rival country as he makes his London debut.

"My win in Valencia has given me confidence for Sunday," Chebet said.

"My main aim will be to break my personal best."

The field will also include a third highly estimable Ethiopian in the form of the hugely consistent Mosinet Geremew, whose second place behind Kipchoge in the 2019 London Marathon was secured in 2:02:55, making him the fourth-fastest of all time.

And Tokyo 2020 bronze medallist Bashir Abdi of Belgium will be another leading contender.